Report by Chris and Hannah Neve.

17 J/80s came to the RLymYC to contest the J/80 National Championships sponsored by Solent Projects and Seahorse Magazine, including last year’s National Champions Phil Taylor and Kevin Sproul on JAT and fresh from winning Cowes Week Jon Powell on Betty, plus a spread of talent including Jeremy Robinson and Geoff Carveth.

The racing took place in the wonderful venue of Christchurch Bay with its light even tidal flow across the course. The RO Roger Wilson set windward/leeward courses with a spreader mark at the top and gate at the bottom.

Saturday started with grey skies and a 10knt Westerly breeze which gradually built with some gusts of 24 knts and shifted South West. With the RO’s threat of going straight to a U flag if the fleet didn’t behave the starts were clean. Local boat, No Regrets, owned by Chris and Hannah Neve, were first to the top mark and keenly watched by the jury boat hoisted the spinnaker for the run. There were plenty of place changes, but No Regrets maintained their lead with Nick and Annie Haigh’s Slightly Steamy from Plymouth second, and Jon Powell’s Betty from the Hamble third.

In the second race, while No Regrets had a clean start and went left up the beat, Slightly Steamy went right and were first at the top mark. There was a close race with Slightly Steamy winning from No Regrets by only 8 seconds and Andrew Hurst’s Fiducial coming third.

The RO looking at the forecast for the following day wisely ran another race whilst the conditions were good.  Race 3 saw No Regrets again leading the fleet around the course and winning by an impressive 2 and a half minutes from Jon Powell’s Betty, and with local Boat Megstar, owned by James Harrison, taking their first step on the podium in third. A crew on Juno slipped over the side during one of the gybes but managed to hold onto a stanchion and was quickly recovered. Beers waiting on the dock supplied by Seahorse Magazine were a welcome sight for the weary crews.

Sunday dawned wet and windy, and with gusts of 30knts the RO postponed for 2 hours to see if the breeze would subside enough to run some racing in the Solent. It did not, and with the updated forecasts looking grim he decided that racing would recommence on Monday, with 4 races, which gave the crews time to enjoy the splendours of Lymington and the New Forest and then join together at the Club for a Championship dinner in the evening

Monday started light and cloudy but once the boats were in the Bay, the breeze built to a lovely 8-10 knots for the first race and gradually up to 12-14knts with occasional upper teens gusts for the remainder. The pressure was on No Regrets to maintain their lead, but they stayed calm and got straight back into it with another first. Slightly Steamy and Betty both had disappointing results, coming 6th and 7th respectively. JAT and Olivia Dowling’s Tip Top were having a very close race and came 2nd and 3rd.

Race 5 saw the first general recall and the RO went straight to a U flag. Three boats were disqualified for being over the line; No Regrets, Jibba Jabba and Wild Cat lll. This gave Slightly Steamy a chance of the title with 2 discards kicking in if 7 races were sailed; they pushed hard and sailed well to win this race from Betty and Tip Top. Annabelle Body’s Mocking Jay led around the first mark in Race 6, closely followed by No Regrets, who overtook them on the next beat to win the race. With Slightly Steamy back in 5th and Betty in 3rd, it also meant No Regrets had won the championship with a race to spare.

In race 7 Megstar sailed a great race leading from start to finish, with Slightly Steamy second, and No Regrets third. Discarding a third and a UFD, No Regrets finished on 6 points, with Chris and Hannah, Phil Lawrence and Nick Hatfield becoming UK J/80 National Champions! Slightly Steamy were second and Betty third.

Due to the generosity of the sponsors; Solent Projects and Seahorse magazine, and supporters  Priory Wines, Harken, North Sails, Nick Cox Chandlery and Bethon, everyone in the fleet was able to enjoy a free buffet and take home a goody bag as well as the great prizes. 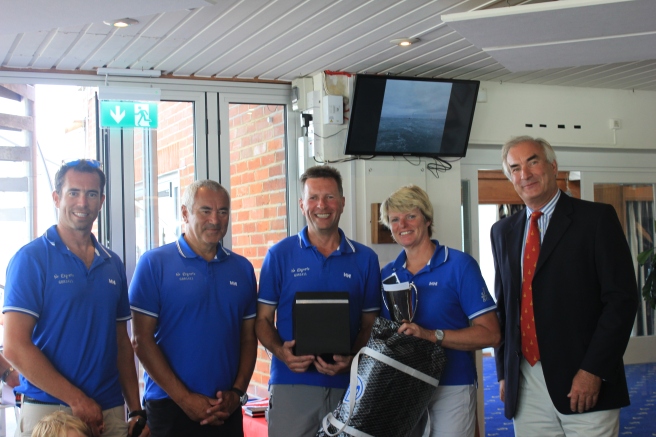